All that Cattolica offers

Known by many as the Queen of the Adriatic, Cattolica is a strip of fine sand 2 km long. The sea of Cattolica shines with an intense blue and its waters are clear and clean. The air you breathe along the beaches is very rich in iodine. The beach of Cattolica is protected by a breakwater barrier that shelters from the waves and the seabed is low, ideal characteristics for the bath of your children. The beaches are all perfectly organized: beach volleyball and beach soccer fields, gyms, bowls and many entertainment for children.

The scenery in which Cattolica is immersed is probably the most impressive of the entire Riviera Romagnola with Monte Gabicce and the hills that seem to hold it in a sweet embrace. Cattolica has three faces: the port, the old town and the tourist area, made to measure tourists. Those who visit Cattolica are undoubtedly impressed by the hospitality and kindness that distinguishes its inhabitants. You can taste in any place, from bars to hotels, the culinary specialties of Romagna cuisine. The squares of the city during the evening will overflow with bright lights and cheerfulness and you can enjoy this wonderful atmosphere of celebration to spend unforgettable moments. The Aquarium of Cattolica is a valid alternative for observing fish very closely rather than catching them. 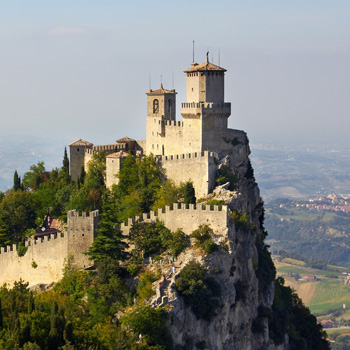 Its village remains perched on top of Mount Titano and exceeds all the others in height on the surface of the sea (more than 700 meters). It is the oldest residential nucleus, not surprisingly it gathers the institutional seats of the Great and General Council and of the Government (Public Palace), and of the secretariats of State. Not only that, its village, accessible by four “doors”, contains the most important monuments and places of interest of the Titan: the three “pens”, or the medieval towers, symbol of San Marino, the Basilica of the Saint that preserves the relics of the one who founded the country, the Monastery of Santa Chiara, the Gate and the Church of San Francesco, the district Ombrelli and the square of Titano. Finally, Piazza della Libertà stands out, where there is Palazzo Pubblico and an exceptional panoramic terrace. 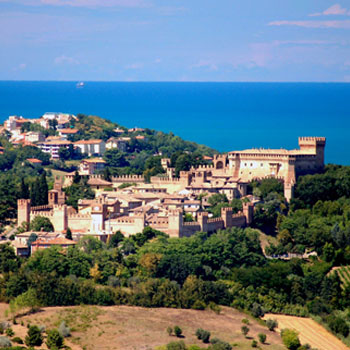 The stronghold of Gradara stands on a hill (142 m above sea level) on the border between Marche and Romagna in a strategic and dominant position. It is 25 km from Rimini, 13 from Pesaro, 3 from the Adriatica road. All those who reach it like to recall the ancient time while you go around the crenellated walls and you cross the drawbridge and you meet the elegant courtyard. The inner rooms recall the splendour of the powerful families who ruled here: Malatesta, Sforza and Della Rovere. We also remember the double walls and the three drawbridges that made almost impregnable the mighty Malatesta fortress. The small village of Gradara is collected between the first and the second walls. 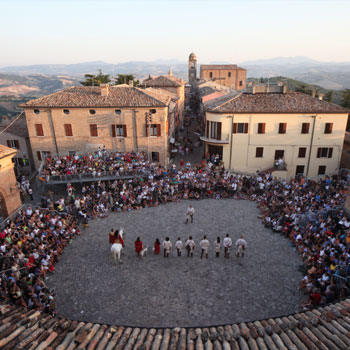 “Mondaino, 420 meters above sea level, lacks a span to be a mountain between the hills on the border of Romagna and Marche, the southern edge of the province of Rimini. A handful of kilometers from Urbino. From the village you can see the Adriatic Sea on one side and the Montefeltro on the other.  Mondaino is the mountain of the fallow deer and also the mountain of Diana, the goddess of hunting. When we talk about the history of Mondaino we immediately remember the Middle Ages, for the strong fortress that dominates the town and its castle walls.  But the history of this village is not only medieval and its origins go much further back in time, intertwining with myth and legend. 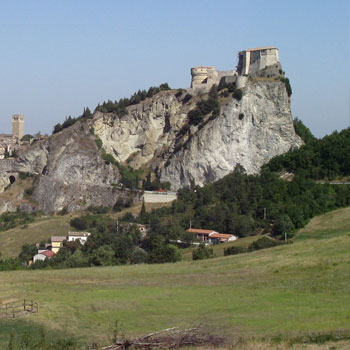 In the middle Valle del Marecchia, in the middle of the historical region of Montefeltro, on an imposing boulder of rhomboidal shape with walls overhanging the ground, stands San Leo. The rocky plate, of calcareous-sandstone formation, is the result of the tormented genesis that led to the formation of the landscape of Val Marecchia, known to geologists as Coltre or Colata della Val Marecchia. The limits of the plate, in the case of San Leo, are entirely identifiable and coincident with the cliffs and overhangs.  Though we do not possess sources that can attest to the year in which the Romans came to this place, we can say that, since the third century, they built a fortification on the highest point of the mountain, But they did not monitor the city of the surrounding walls, for the cliff is in itself inaccessible on every side. At the end of the third century, on the original shrine, rose the Pieve, The building, built in the Carolingian era and renovated in the Romanesque era, collects around itself the core of the medieval city. After the seventh century, next to the church, was built the Cathedral. In 1173 it was completely renovated, in the Romanesque-Lombard forms, and joined to the powerful bell tower of probable Byzantine origin. The core of the sacred city, consisting of the Bishop’s Palace and the residence of the Canons, was thus to constitute a real urban agglomeration. The medieval center preserves the Romanesque buildings, Pieve, Cathedral and Bell Tower, while the residential buildings have undergone numerous transformations mainly during the Renaissance period. The historic town extends around the churches that overlook the central square, dedicated to Dante Alighieri, and consists of several buildings: the Palazzo Mediceo (1517-23), the residence of the Counts Severini-Nardini (XIII-XVI century), the Palazzo Della Rovere (XVI-XVII century), the Church of Our Lady of Loreto and houses built between the fourteenth and the nineteenth century.

Built on the rocky emergencies of Rupe and Roccione, Pennabilli is a characteristic town with a medieval layout. It owes its urban layout to the union of two ancient castles, that of the Billi above the Rupe and that of Penna above the Roccione. The surrounding area has been inhabited since ancient times, seeing the succession of Umbrians, Etruscans and Romans. But it is with the phenomenon of the stronghold, around the year 1000, that the town develops. First it became a fief of the Carpegna family, then of the Malatesta family, probably the “cradle”, before this family descended to Verucchio and Rimini. 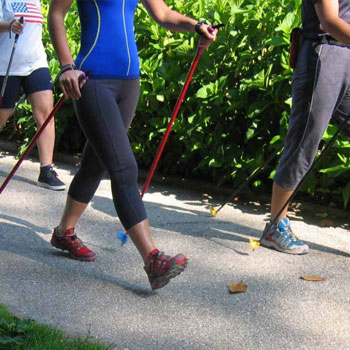 “Nordic Walking” arrives in Cattolica. Because even in the Riviera di Rimini the “Nordic Walking” is becoming increasingly popular among sportsmen and lovers of outdoor life. Although originally this sport was practiced exclusively in the Nordic countries, now it is also very well in our latitudes, promotes health and endurance, and boasts an energy consumption of up to 46% higher than a normal walk.
As Nordic Walking is less demanding and more challenging than running, but much more effective than simple walking that acts positively on the cardiovascular system, resulting in effective training, is a sport that can be practiced by people of all age groups even without particular workouts.
Another beneficial factor of Nordic Walking is the development of motor coordination, in fact the normal advancement of the opposite leg and arm “accuses” the presence of sticks and definitely requires a greater commitment by the practitioner.  Theater of excursions are the natural beauty and landscape of the park of Conca and the coast.

Horses Riviera Resort is spread over an area of about one hundred twenty thousand square meters, on a rural area of Valconca. Of new conception, the equestrian center of San Giovanni in Marignano (RN) has been designed to measure for horses and riders and every detail has been studied and developed starting from this philosophy.  Horses riviera Resort hosts national and international show jumping competitions for athletes of all categories.  There are six fields available to the riders: three for competition, two for trial and one for work.  Easy to reach, just 2700 meters from the Cattolica exit of the A14, Horses Riviera Resort is completed with an offer of exclusive services for hospitality and is proposed as a place to live in all its charm in a relaxing and pleasant atmosphere.


Warning: Use of undefined constant php - assumed 'php' (this will throw an Error in a future version of PHP) in /home/customer/www/leonardohotel.it/public_html/wp-content/themes/leonardo_hotel/part-snippet_modal.php on line 10